In lieu of a full review, I offer up this promotional video I produced for SRO’s Dracula.

Dracula continues through to October 15th in the Shedd Theatre within the Columbus Performing Arts Center at 549 Franklin Avenue, and more information can be found at http://www.srotheatre.org 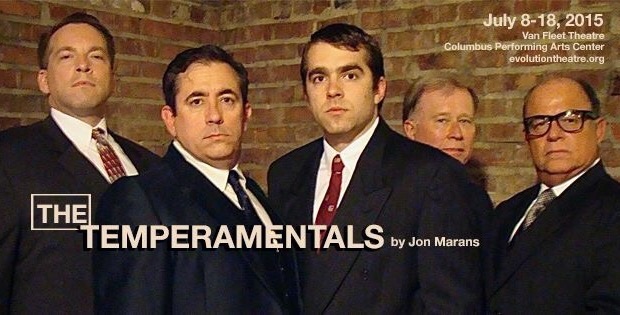 It’s important to stand up and be counted; that’s what I took away from The Temperamentals by Jon Marans. That’s the first step – stand up, be counted, and let people know who you are, something people seem to have little trouble doing nowadays with the Internet and so many ways to connect and network. It’s easy to forget how difficult this was in the homogeneous 1950s, where anything that didn’t conform was assumed to be subversive “commie” propaganda and was vilified. Some movements, such as that of the Mattachine Society, one of the first gay rights organizations (founded in 1950) that is the subject of this play, did have Communist roots, mainly because aspects of the ideology were appealing even if they didn’t work in execution. Something different was needed, and it all started with five men who were determined to organize in order to represent the silent “sexual minority.”

From now on when I hear cries from the right wing about the nefarious “gay agenda” I’ll think of this play and the difficulty that the founding members of the Mattachine Society had to get any kind of agenda on the table. “Temperamentals” was the term gay men in the know used for each other, and the only “agenda” they seemed to have at the time was to sneak around for elicit sex and remain closeted. Thank God there were people like Harry Hay and Rudi Gernreich, two of the five founding members, who thought otherwise.

Brent Alan Burington plays Harry Hay with gusto and verve. A talented actor with a firm voice that carries, Brent comes off as honest and sincere in a tricky part as he is the engine that keeps the play moving while playing a character that is not always particularly likable. Adam Greenbaum Latek plays his lover, Rudi Gernreich, with a rather thick Viennese accent that varies in intensity (when he says the name Lana Turner, his accent suddenly disappears when her last name is stated) and comes off as a bit too mannered; nevertheless, Adam’s presence grew on me, and his moments of intimacy with Brent feel natural and rather sweet. There is a moment early on when their hands lightly graze each other that is as affectionate and subtle as anything I’ve seen on the stage in some time.

David Allen Vargo as Chuck Rowland is another standout with a commanding stage presence and strong voice. He’s a great foil for Mark Phillips Schwamberger as Bob Hull, Chuck’s former lover and current housemate, and their banter back and forth is humorous and all too genuine as anyone who knows any long term couple – gay or straight – will tell you. Donnie Lockwood plays Dale Jennings (and other small parts, as do David and Mark), and one of his special talents appears to be the ability to sweat on cue. There is a scene where he is on trial and has very little to say but the tension of the moment is conveyed by his perspiration and some very subtle expressions. Donnie is a terrific part of this strong ensemble; he has nice hair too, which has nothing to do with his performance but deserves an honorable mention.

Douglas Whaley’s direction is firm and swift, perhaps even a bit too fast as blackouts at the end of scenes sometimes occur a beat or two too quickly and are jarring. I especially liked how Douglas used the extreme left and right sides of the performance space in his staging for a few key moments. Lighting designer Curtis A. Brown and scenic designer Shane Cinal work well together to evoke different locales with few set pieces and lights, one of my favorites being that of a furtive street corner bathed in a bit of blue light with a single light pole descended from the ceiling.

While the play begins to falter a bit at the end (Marans doesn’t appear to know how to end it, resulting in an awkward summary of events told by the cast apparently still in character), the attention that is brought to the little known gay rights pioneers presented here is quite timely, especially in light of the SCOTUS ruling on gay marriage a few weeks ago. There is even a section of the play where the merits of gay marriage are discussed, but in terms of gay people marrying straight people and how it is dismissed as not being a good idea. To imagine we’ve come this far in sixty-five years is truly remarkable, and how wonderful that this play exists to shed some light on this obscure piece of gay history from the not-so-distant past.

In a way the play reminded me of the situation between Aldonza and Don Quixote in Man of La Mancha; Aldonza only saw herself as a worthless kitchen slut until someone else convinced her that there was more to see. And isn’t that what the Mattachine Society started to do for gay men? Only when some of them stood up did the rest begin to look at themselves and think maybe there’s more than just sneaking into public restrooms and back alleys. I guess if society and people tell you enough that you’re rotten you’ll begin to believe and expect it yourself, but also the reverse is true. It all had to start somewhere.

The Temperamentals continues through to July 18th in Columbus, OH, and more information can be found at http://evolutiontheatre.org/

Anyone else think that if they make a feature film of #tigerkingnetflix that @rachelbayjones would be a perfect #carolebaskin ? Other #broadwaymusical or @dearevanhansen fans see the resemblance?! @netflix look into this!