Last fall I assumed the position of President of SRO Theatre Company, which has severely limited my ability to review local theatre (please hold the applause). I now receive many requests for information on local theatre, ranging from auditions, script submissions, unsolicited resumes – you name it. I have a list of website links on this blog to assist people in finding the answers to so many of these questions, but in this day and age it seems to “like” and “subscribe” to a company’s events on their Facebook page is the easiet and most efficient way of keeping on top of things. There are also several groups that are helpful to join as well, in addition to some performance and audition calendars.

Here I am posting links to many important resources; some are websites, but many more are Facebook pages or groups. This list is not complete (is any list ever?), and I aim to add to it in time. It doesn’t include the many fine high school theatre departments as I found that many either didn’t have websites and Facebook pages or that they weren’t always up-to-date. There is also no distinction between professional, semi-professional, and community theatre in this list. Still, this is a good starting point to add to your Facebook “likes” and bookmarks for the time being.

I believe that fans of theatre will see more theatre if they know of all the options available. I also don’t believe one theatre company has to do poorly for another to do well (I know several theatre companies appear to feel differently). Unless we are all doing the same shows at the same time, we aren’t in competition. At SRO, we now have a policy to display as many cards and flyers for other theatre companies as we receive at our performances. We don’t ask for or expect other companies to follow that practice; some are open to it while others are silent, and that’s fine. The bottom line is I want everyone to succeed and to help connect theatre with the community. While there may be individual people within certain organizations that I feel try to denigrate and dismiss other companies and their work, I find that, by and large, the artists, technicians, and audiences just want to come together and enjoy the experience of live performance.

Please help me add and correct this list by posting comments.

Out of the Box Community Theatre (OOTBCT)

State of the Arts Productions (SoArtsPro)

Why did it take me so many years to discover that there was so much theatre to enjoy in and around Columbus, Ohio? I don’t have a good answer for that. Sure, I got my theatre fix seeing as many shows on Broadway as possible on my trips to New York a few times every year. I would see a lot of the big tours when they would pass through town as well, and a show now and then at the Riffe Center, but that was about it until two years ago.

My discovery of the large and diverse theatre scene in the area began when I happened upon an ad for tick, tick…BOOM! being performed by the Evolution Theatre Company. I think I saw it on Facebook, but I was unfamiliar with that theatre group or the Columbus Performing Arts Center, the venue in which it was being performed. I certainly didn’t expect much when I saw the little building hidden away on Franklin Avenue in a section of town where I’d never really visited. Maybe that lack of expectation is what made the experience so seminal for me.

What I experienced that day was what I would call organic theatre, raw and fresh without the burden of large production values that swamp many a Broadway show. Not that I don’t love a big Broadway show (I do), but there is something to be said about having a few set pieces, just a smattering of props, and just getting out there to tell a story. I believe that there is talent everywhere, and Columbus sure seems to have more than its share.

While at the Columbus Performing Arts Center to see tick, tick…BOOM! I saw another theatre company was performing Next to Normal, which I had seen on Broadway years before and loved. Of course I had to come back to see it. I looked up both theatre companies on Facebook, liked their pages, and then started searching for all the other theatre that I was apparently missing out on. I even read the bios of the actors in the programs to tick, tick…BOOM! and Next to Normal to see what other theatre companies they had performed with in an effort to find out as much as I could about this underground (well, it was to me, anyway) network of theatre groups and performance spaces all over town.

I am that person that pestered all of my friends whenever I found a play was being performed to see what they were doing the following night. “What play is it this time, Chuck?” they would sigh. I couldn’t always sell them on joining me, but more often than not when they did they ended up enjoying themselves, which helped me corral them into seeing another show a few weeks later. Not every show was great or even good, but none were as aggressively bad as some Broadway shows I’ve seen. I remember how much fun my friend Kona and I had at Imagine’s La Cage Aux Folles, or the time Michael and I giggled our way through Short North Stage’s The Divine Sister, or the time I went alone to Evolution’s Sons of the Prophet and because of a mistimed potty break found myself returning to the theatre to have two guys stripping (in character) just a few feet away from me.

I started a blog earlier this year on a New York theatergoing trip mainly to chronicle my thoughts on the shows I was seeing so I wouldn’t have to keep repeating myself to the people that would ask, “What did you see, and what did you think?” Lots of people write about New York theatre, but what about theatre in Columbus? The Other Paper was a good source for information and reviews until it disappeared in 2013, but I was fortunate to find Richard Ades excellent blog at http://www.columbustheater.org (his “On the Boards” weekly listing of theatre in and around Columbus has informed me of so many plays I would’ve missed otherwise). Columbus Alive! is good as well, but with so much theatre to cover naturally many plays would come and go without much notice in print.

I started writing my thoughts on the shows I was seeing in Columbus as I thought that maybe it could help bring some awareness so others could find out about and enjoy the shows that I was seeing all the time. I’m not a professional critic and have no credentials for writing about theatre save for my passion as an audience member. Everyone has an opinion and certainly mine is just that; an opinion, no more or less valid than that of anyone else. One thing led to another and I befriended some actors and directors on Facebook. Then the “I Support Local Live Theatre” group was suggested to me to join, and I started to discover whole other groups of performers that I had overlooked!

Doing theatre on little to no budget leaves no money with which to advertise, and so word of mouth and some effort to seek out the events of interest is required. Some theatre groups have harnessed the power of social media to great effect posting about upcoming performances and keeping their audience “in the loop” while others rarely post until the last minute when most people have their plans for the weekend or evening already set. Because of changes with Facebook I recently had to go to all of the theatre company pages I had previously “liked” to then “subscribe” to their updates as simply liking their page wasn’t enough to keep the notifications coming anymore.

Through the “I Support Local Live Theatre” group on Facebook I learned of the Third Annual Columbus Black Theatre Festival coming up this weekend! I don’t know where I was for the first two festivals, but I know I’ll be there this weekend for the third. Spearheaded by Julie Whitney Scott and her Mine 4 God Productions (http://www.mine4godproductions.com/home.html), the goal is to present original works by local black artists. Ms. Scott’s theatre company also offers workshops and outreach programs for the community. “I support all theatre, even high school plays,” says Ms. Scott. “I also look to promote theatre productions on my radio show (http://www.talktainmentradio.com).” 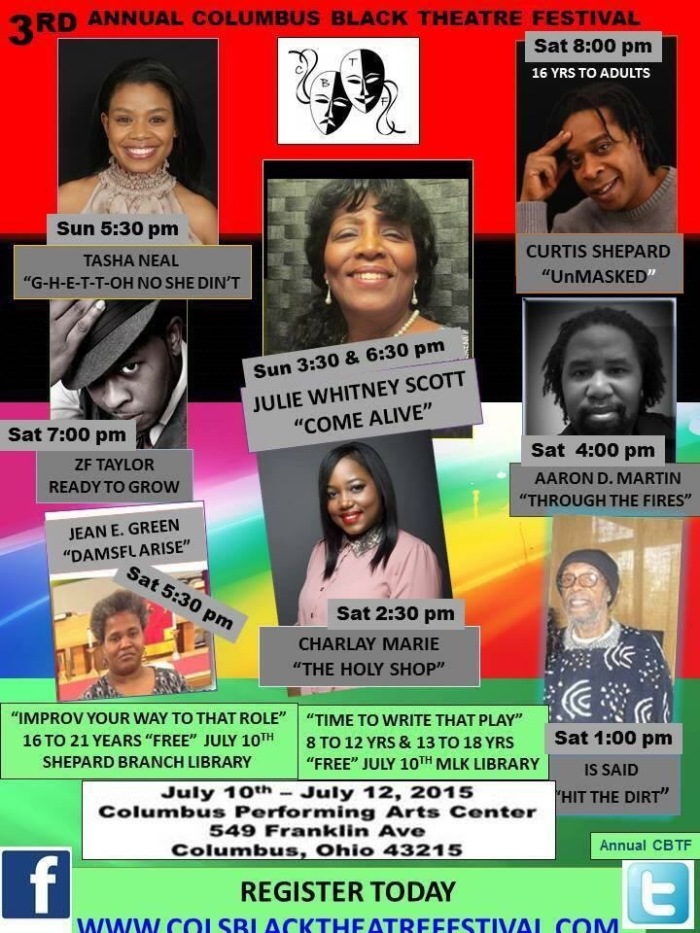 Tasha Neal Harris is performing her show G-H-E-T-T-OH No She Din’t as part of the festival at 530pm on Sunday, July 12th at the Columbus Performing Arts Center in the Shedd Theatre. Though she performed it at Ohio University and in this same festival last year, Tasha admits, “It’s still scary because there’s really no script to it. It’s usually not very big, unfortunately,” she says of the audience. “I like to perform it in front of any crowd of people who want to be entertained,” she added. “I would prefer to perform it in front of fifteen people who want to be entertained than fifteen hundred people who are jerks.” 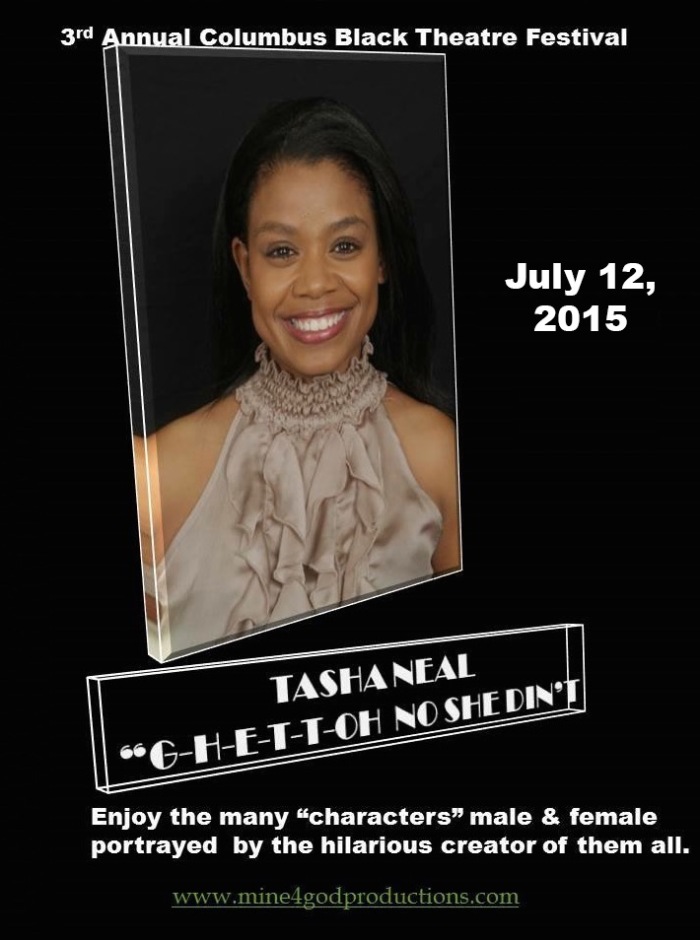 My experiences in the audience of the plays I’ve seen in Columbus support what Tasha says; the theatregoing crowd may be small, but they are supportive and fervent. “I did a play for the Little Theater Off Broadway,” Tasha said, referring to the theatre in Grove City (http://ltob.org/), “and it was probably one of my favorite plays I have ever done. The crowd was probably about forty-five to fifty people, and it was so amazing. I like a smaller theatre space as well because when you have a big theatre space everyone kind of spreads out and it looks like less people are there and the mood isn’t contagious because people aren’t close to one another.”

Tasha and I agreed that, as with movies and books, there is some theatre that is right for everyone; people just need to be exposed to the genre that they like. “People who think they don’t like theatre have not been to the right theatre or show,” Tasha said.

This weekend I compiled a bunch of links on my blog (at the bottom of this page on the mobile version, and to the right on the desktop site) covering as many local theatre groups as I know about, and I plan to keep adding more. I’m going to keep nagging at my friends to go see plays with me, and I hope that my writing on this blog might help bring attention to the wealth of inexpensive theatre right here in our backyard.

Two of the big companies that license plays for performance even offer a search tool to find productions playing in your area. Samuel French’s “Now Playing” section helped me find some interesting high school productions planned for the coming year (http://www.samuelfrench.com/now-playing), and Music Theatre International has a terrific app (http://www.mtishows.com/content.asp?id=2_3_1) that helped me discover the Weathervane Playhouse in Newark as a premium theatre just a short drive outside Columbus! During most months I bet I could see a different play every week right here in Columbus, which makes the stretches of time between my marathon New York excursions bareable.

Here’s my itinerary for this week: 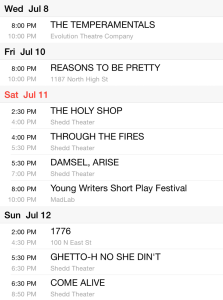 Crowded? Sure, but with so much talent right here in Columbus, I wouldn’t have it any other way.

GO SEE A SHOW! And if you see something you like, tell a friend about it! They say that theatre is a dying art, but I refuse to believe it.