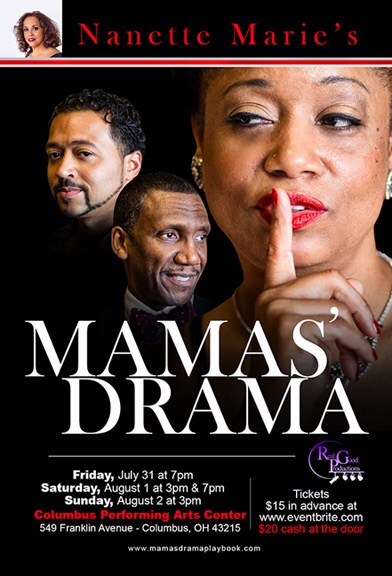 How well do any of us really know our parents? That’s the question I asked myself after I saw Nanette Marie’s Mamas’ Drama, a work filled with more drama than you can shake a stick at! And that apostrophe in the title is correct as it is the drama for several mamas, the story spanning more than three generations of a family that has lived with secrets. The play is autobiographical as well, based mostly on Miss Marie’s mother, and it just goes to show that sometimes the truth is stranger than fiction.

The story spans from 1929 to 2004, starting with a young Josephine being told by her mama, Millie (Rita Arnold, a force to be reckoned with), that the man she thought was her daddy wasn’t her real daddy. This deceit helps color Josephine’s life. She gets involved with George (an older married man) when she is sixteen, gets pregnant, is beat by her mama when she finds out, and then miscarries! And that’s just within the first fifteen minutes! Before you know it the babies start rolling in along with the infidelities (both George and Josephine are flawed in this regard), and the secrets and lies start building until the truth eventually has to rise to the surface. After seeing this story, I should think most people would heave a sigh of relief that at least their lives aren’t filled with such drama – or are they?

I guess it’s difficult for us to imagine our parents as something other than solely our parents; they are just other people to everyone else, with their own strengths and weaknesses, not the infallible Gods we sometimes picture them to be when we’re little. All of our parents were also young once, doing all of the things we pretend to others that we never did, and they make the rules that work for them even if we don’t agree or understand. Josephine and George were married well over fifty years in spite of their infidelities, and that’s because they defined the terms of their marriage based on their rules. They didn’t exactly have an open marriage, but they chose to overlook things they didn’t want to deal with or considered less important than the overall picture, and this especially caused problems with their oldest son, Steven (played intensely by DeVance Wright). Our parents aren’t perfect people, and their motivations and decisions can’t be neatly bound and explained for us in the way that we might like; sometimes they are messy, and there is nothing you can do but accept it and love them.


There are many speaking parts in Mamas’ Drama and the cast is quite large, ranging in ability from adequate to incredibly skilled. The powerhouse performance of this piece is by Shelby V. Holden as Josephine, playing her from being a teenager to her eighties. Shelby plays up the naïveté of the young Josephine well, and she helps us understand how it is the craving for attention that drives a lot of Josephine’s choices; she isn’t a mean or manipulative person, just someone who reacts in the moment to what feels right at the time. Shelby has mastered the art of aging on stage with little makeup; subtle adjustments in her clothing, hair, and posture help us see the passage of time.

Mark E. Pinkston is George, Josephine’s philandering and cuckolded husband, and he also pulls off a remarkable aging process as well as directing the play! Mark’s likability helps us not to hate George as he does some pretty low handed things, and both he and Shelby give life to the characters in a way that we care about them even when they do things that we know will only end up causing more trouble.

Other honorable mentions are for Jesse Nathaniel Robinson as Raymond, Josephine’s long-time love; Yolanda Board as Shirley, Josephine’s best friend who offers the good advice that Josephine never takes; and Syretta Bates as Suzette, the love child of Josephine and Dante (Chad Michael).

What I like most about Mamas’ Drama is its lack of judgement. The characters know when they are doing something they shouldn’t and don’t need to be scolded like children. These are people that live with the consequences of their actions, and there is a lesson to be learned there about forgiveness, acceptance, and the importance of family.

I admit that I got confused a bit when the children started rolling in and the paternity of a few of them was questioned. Still, what is important is that the story be engaging, told well, and be entertaining – Mamas’ Drama is all of that. It’s the kind of play that is sure to elicit gasps from the audience as there seems to be more drama around every corner, but the ultimate destination is one bound for healing and acceptance.

Mamas’ Drama continues through to August 2nd in the Shedd Theatre within the Columbus Performing Arts Center at 549 Franklin Avenue, and more information can be found at http://mamasdramaplaybook.com/previous-productions/