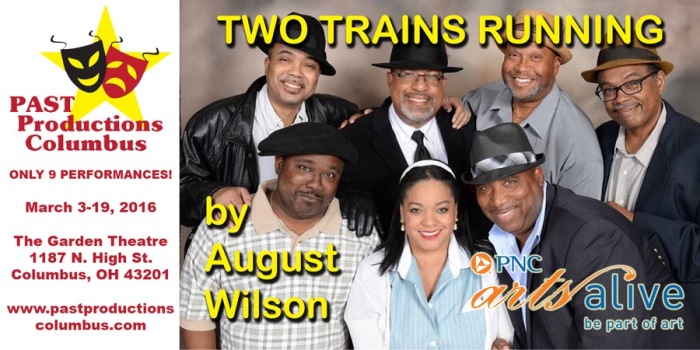 We can’t always control what happens to us, but we can control how we respond to it; we can either settle for the way things are, or stand up to actively change the narrative. That’s the lesson I learned while watching how the people in August Wilson’s Two Trains Running responded to adversity; some caved immediately, others balked but eventually gave in, and a few others continued to fight for what was right, even when their words fell upon deaf ears. This PAST Productions Columbus presentation is one of a series of works by Mr. Wilson being produced throughout this year in a partnership with Short North Stage funded by PNC Arts Alive.

Two Trains Running was first performed in 1990 and ran on Broadway for four months in 1992. The play in set in Pittsburgh at the end of the 1960s inside Lee’s Restaurant. Memphis Lee is the owner, and the city is exercising its right of eminent domain to take possession of his restaurant. Memphis is determined to get $25,000 for his place, even though its glory days are long past. The city is supposed to make an offer of fair market value for the building, but no one believes Memphis will get what he demands because he is black. Lee’s Restaurant is a hangout for several men in the neighborhood: Wolf, a bookie; Sterling, recently paroled and looking for work; Holloway, a retired painter; West, a wealthy funeral home director; and Hambone, a mentally-challenged man. Risa is Memphis’ waitress, far more interested in chatting with the fellas than doing her job, much to Memphis’ chagrin.


Throughout the course of the play we learn about how the Hill District where the restaurant is located was once an active, prosperous neighborhood; now it is stagnant with few opportunities and a general malaise of unrest. Many people play the numbers, hoping that their number may come up, which is so unrealistic that it seems logical compared to trusting that their lots in life will improve any other way. The optimism brought by the civil rights movement earlier in the decade has evolved into a more aggressive feeling towards the great social and economic divide between white and black people. Still, the people at Lee’s Restaurant still find plenty to laugh about, their sense of humor about the situation and their faith in a higher power being the support they need to keep going.
Standouts in this talented ensemble are Tony Roseboro as Memphis, playing the determined business owner with nerve; Mr. Roseboro never makes a false move, and he’s the kind of flawed hero you want to root for; Lisa C. Shepherd is Risa, Memphis’ waitress and the object of much of his scorn; Ms. Shepherd isn’t an easy nut to crack, but when she allows her emotions to bubble to the surface she’s electric to watch; Vincent L. Mason plays West, the funeral director; Mr. Mason speaks deliberately and with care in a way that lets the audience know that he’s aware of how his community holds his success in high regard while also relaying how that kind of pressure can be stifling; last but not least is David Johnson as Hambone, the man-child who constantly shouts, “I want my ham!” Mr. Johnson is hilarious without turning Hambone into a gross caricature of a challenged individual; his continued pursuit of the ham that the grocer cheated him out of nearly ten years before is a comforting daily distraction to the neighborhood. When circumstances around Hambone shift, Ms. Shepherd takes full advance of the moment, her plea on his behalf quite heartfelt and sincere.

The title Two Trains Running is a reverence to Memphis’ hometown which he remembers for the two trains than ran there; he might as well be referencing the two paths he could take in regards to the sale of his business: accept less or fight for more. His fight is akin to that of Cervantes’ Don Quixote battling windmills, a fool’s folly a la “The Impossible Dream,” and this is one area in which Memphis and Hambone are matched; they both fight for what is just and right no matter the catcalls or pressure from the crowd. There’s a lot to respect there and with which many of us can identify; all of this is clear without being overstated by director Patricia Wallace-Winbush.

“Language in this play contains racial epithets that may offend some audience members,” is printed along the bottom on the show’s program; I rolled my eyes at first because I thought it was an unnecessary warning. Are we so politically correct that everything needs a warning label? That being said, the “N” word is used a lot in this play, but it is integral to the story. The “N” word is used as an endearment as well as to cut others down to size, and its pervasiveness is effective in demonstrating a community in which people often tear each other down through their words rather than build each other up, partly I suppose because that is what had been done to them all of their lives. This play is set in a time before rap music and a younger generation reclaimed the word for use with a different intention; here its use still has bite, and the black girlfriend I attended with even mentioned at intermission that it was a bit much even for her. I take that as showing the word’s power and effectiveness of its use in this piece.


Two Trains Running is the kind of play that takes its time to unfold (running well over two and a half hours including an intermission), painting a vivid picture of a specific place and time with characters that are true to themselves and interact naturally. What the piece lacks in plot it more than makes up for in message: Keep fighting for what is right. This is a sentiment that will never go out of style, and one that we should all remember to live by.

Two Trains Running continues through to March 19th in The Green Room at The Garden Theatre located at 1187 North High Street in downtown Columbus, and more information can be found at http://pastproductionscolumbus.com/ and tickets purchased via http://m.bpt.me/event/2488083