Imagine a ghost story with no mood lighting or creepy sound effects. Now add some awkward scene changes where, in place of transitional music or applause, there is just the squeaking of scenery on wheels being moved about the stage. Don’t forget to have moments where “ghosts” appear brightly lighted and moving about like zombies. Once you have all of that together, you have the core elements that make up Little Theatre Off Broadway’s The Turn of the Screw, a production so plodding and creatively bankrupt that the couple in front of me and the group of three ladies to my right all fled at intermission, probably to salvage what was left of their Friday night. 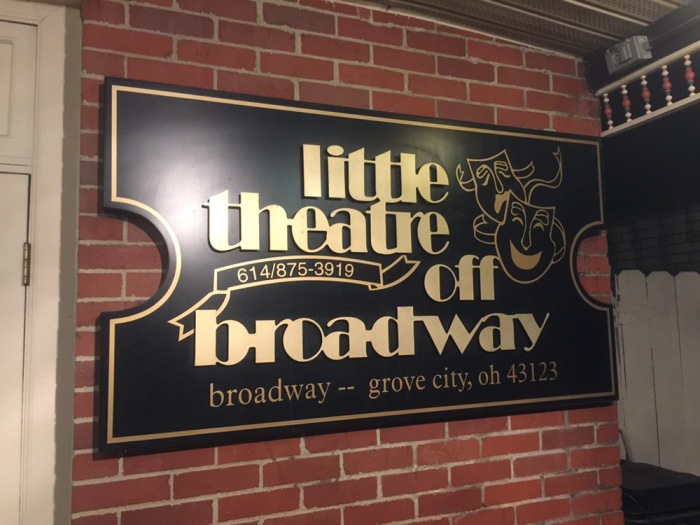 There is plenty of atmosphere in the original novella by Henry James, and the 1961 film version titled The Innocents starring Deborah Kerr is a classic; this adaptation by Jack Neary seems to be okay, save for an incredibly silly coda at the end. The Turn of the Screw is about a governess sent to look after two orphaned siblings, Flora and Miles. Once in their company, she sees and hears what seems to be apparitions of the previous governess, Miss Jessel, and man servant, Peter Quint, both now deceased under mysterious circumstances. The new governess fears that the children are consorting with these ghosts and that their lives are at risk. The housekeeper, Mrs. Grose, isn’t sure what to think; are the children in danger, or is their new governess off her rocker?

Somehow this classic thriller has been gutted, performed as if it is a training exercise about how to walk and talk as well as enter and exit rooms. It’s about as thrilling as watching someone folding napkins. I don’t see what director Brian A. Palmer must’ve been thinking when he planned this out as all of the elements of a good ghost story are there in the script but without any of the stage accoutrements – no drippy candles, darkness, eerie sounds or music. I don’t blame the actors, none of which I feel would be fair to name here; the governess, housekeeper, and Flora have their moments (the actress playing the governess sneezed during the second act; it was the most exciting, realistic moment in the play), but the rest of the cast (especially the man playing the children’s uncle at the beginning of the piece) are merely reciting lines with no feeling or apparent understanding of what they’re saying.

The two actors playing the ghosts appear in makeup that makes them look more like extras on “The Addams Family” set than creepy other-worldly beings. Their costumes are draped with some brown fabric that resembles hosiery, as if these spirits are themselves haunted by a bad case of static cling with pantyhose sticking to their clothes. I heard some quickly stifled laughter from the audience when these ghosts appeared, sometimes walking through the audience to get to the stage. And again, the set is rather brightly colored and everything fully illuminated save for a few moments where the lights are dimmed slightly. Where are the murky shadows? The sound of the wind or chirping of crickets? A soft bit of foreboding score to bridge the scenes? None of that is here. Another thing that bothered me was the discussion of Peter Quint’s hair being red; when he appears as a ghost it looks pretty dark to me. That’s small potatoes, true, but it’s still an example of the lack of the requisite attention to detail one would expect to find.

This production of The Turn of the Screw is a glittering example of how important a director’s vision and guidance is to the success or failure of a production. Some of the cast isn’t without talent, but they appear to be floating free without a firm grasp on how to approach the material or sustain – or generate – any kind of mood. The material is ripe with opportunity for creativity, but what is being presented here is embarrassingly stale and static. As much as I’m a fan of live theatre, go buy the movie The Innocents instead.

The Turn of the Screw continues through to February 7th in the Little Theatre Off Broadway located at 3981 Broadway in downtown Grove City (around 20 minutes from Columbus), and more information can be found at http://ltob.org/ 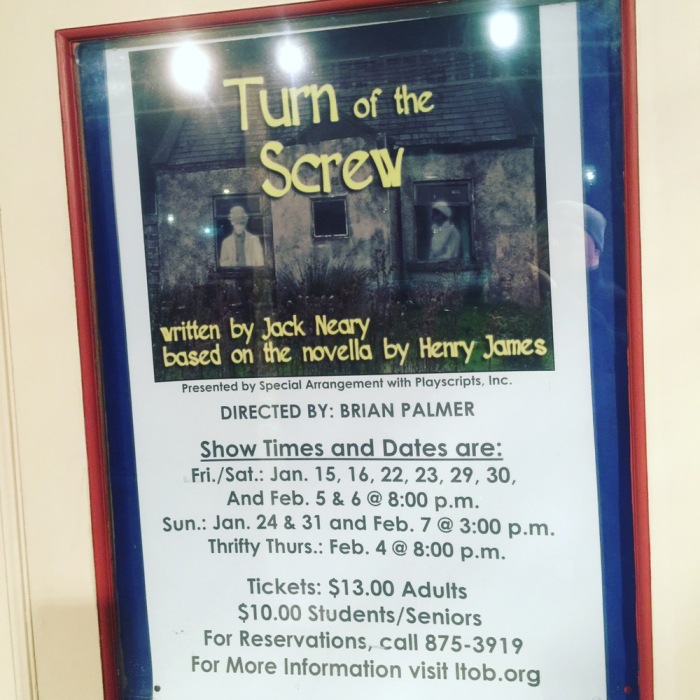 One thought on “The Turn of the Screw (Little Theatre Off Broadway – Grove City, OH)”