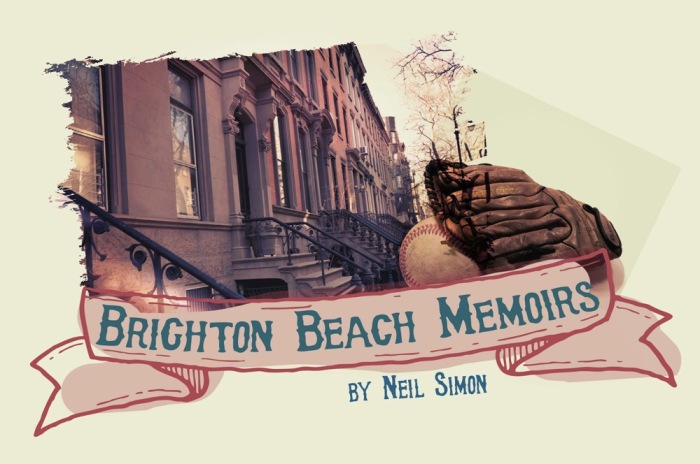 Growing up is so awful that it’s a good thing we have to go through it only once. The process is only seen as poignant in retrospect, as the pain and embarrassment is easier to overlook in the rearview mirror. Gallery Players is now presenting Neil Simon’s semi-autobiographical tale of youth, Brighton Beach Memoirs, as the opening show of their 67th season, and adolescence has really been depicted so candidly – or as endearingly funny.

Brighton Beach Memoirs premiered on Broadway in 1983 and was a hit, running over three years, and was then adapted into a rather stale and miscast film in 1986. The play takes place in Brooklyn in the fall of 1937 during The Great Depression and is about the Jerome household, a Jewish family encompassing Kate and Jack Jerome; their two sons, Eugene and Stanley; Kate’s widowed sister, Blanche; and Blanche’s two daughters, Nora and Laurie. Most of the action revolves around Eugene Morris Jerome, a fifteen-year-old who is dealing with puberty and the ever-changing struggles of those around him, covering situations as diverse as unemployment, death, love, and decades-old grudges that finally come to the fore.


This play can only work with a Eugene that is of the right age and able to have frank discussions about sex and the difficult changes boys go through at that age; this production has Neil Kalef in the role, who is just the right age, has the slightly sour attitude commiserate with being ignored by his family, and is free from embarrassment saying lines that would make most teens blush and look away. Mr. Kalef is utterly believable as Eugene, and his asides to the audience are as honest as they are funny.
There isn’t a bad performance in the play, but special credit should also go to Susan Gellman as Blanche, Jennifer Geiger as Nora, and Rick A. Holt as Jack. Ms. Gellman plays rather meek and withdrawn extremely well, and her transition to being a stronger parent and more assertive in taking control of her and her daughters’ lives is revelatory; she’s heartbreaking while reading a letter from a potential suitor, and the scene she shares with Ms. Geiger in which she finally takes charge as a mother is electrifying. Ms. Geiger as her daughter Nora is present and reacts naturally to everything around her; she’s believably excited at the prospect of a career on Broadway and firmly stubborn to get her way.
Rick A. Holt is extremely strong as Jack, the patriarch of the family, always the one sought out for advice and working several jobs to make ends meet. Mr. Holt has a brassy swiftness about him that makes Jack both intimidating to his family as well as the kind of guy you know they want to please. When he tells his son Stanley (Phil Cunningham, who is just right as the ne’er-do-well oldest son, and whose scenes with Mr. Kalef as his younger brother Eugene work because of their chemistry) that there is nothing that Stanley could do that he as his father couldn’t forgive him for, it’s enough to make you wish that every father was as honest and direct as Mr. Holt is as Jack. Felise Chernoff as his wife Kate is no slouch either, perfect as the nagging mother whose demeanor contrasts with the love she obviously feels for her family. Ms. Chernoff had more than her share of stumbles during the opening night performance, but I’m sure that had more to do with nerves than any lack of talent or preparation.
Set designer Jon Baggs has created a set that qualifies it as another character in the play, complete with a living and dining room and stairs leading to a second level where the brothers and their cousins share separate rooms. It looks like people really live there, and such care has been taken to make it appear functional and appropriately period. Director Mark Mann keeps things moving and making sense, not allowing any scene to bake too long; he really gets the point of the play and understands how to make the actors work together as a family.
You don’t have to be Jewish to enjoy this production, and I enjoyed learning a bit about the culture. Most everyone will recognize characteristics of people in the play as being similar to some people in their own family, and there are definitely scenes that any male will understand and probably smile about to themselves. Some of the dialogue and situations may keep Brighton Beach Memoirs from being suitable to anyone under the age of thirteen, but boy would having seen this play at that age have helped me realize that I wasn’t the only one dealing with such issues.

Brighton Beach Memoirs continues through to November 1st in the Roth-Resler Theater at the Jewish Community Center of Greater Columbus located at 1125 College Avenue, and more information can be found at http://columbusjcc.org/cultural-arts/gallery-players/

I am so glad I got to spend so much time these past two months with “Sy” before he passed away yesterday. From growling and biting me the first week at my new home to fairly quickly following me from room to room and sleeping on or near my bed every night. Damn, what a smart, ornery, handsome, wonderful dog @zaxruss had.
%d bloggers like this: