It’s a tricky thing to take as established a classic as Robert Louis Stevenson’s 1886 novella Strange Case of Dr. Jekyll and Mr. Hyde, deconstruct it, and rebuild it into something both familiar and new; this is what Jeffrey Hatcher has done with Dr. Jekyll and Mr. Hyde, his 2008 adaptation that shifts the focus onto Mr. Edward Hyde as one who is perhaps not entirely evil and Dr. Henry Jekyll who isn’t perhaps all good either. The idea of Jekyll and Hyde with split personalities is a firm part of popular culture, spoofed in Bugs Bunny cartoons and sitcoms to even being the basis for a Broadway musical; Hatcher knows there is no surprise left there, but there certainly is in this version by way of reframing the plot to see it from a different angle. It is this creative reworking of the classic that opens Standing Room Only’s 31st season in an eerily effective production, arriving just in time for Halloween.

Everyone in this small cast of six deserves recognition. Joe Dallacqua plays Dr. Henry Jekyll with suave confidence, cutting a frame not unlike a young Richard Gere; Erica Beimesche plays Elizabeth with fresh-faced naïveté, the typical youth attracted to the bad boy in the form of Mr. Hyde; James Harper is intense and frightening as one of many faces of Edward Hyde, but he’s also effective as the nefarious Dr. Carew; Jordan Estose enjoys playing the fop as Lanyon, but he also gets in on the action as a violent Hyde as well; Catherine Cryan plays the dutiful servant Poole and her other roles with efficiency as well as an unlikely (but fierce) face of Hyde, one scene involving a transformation being particularly physical and impressive; last but not least is Ken Erney as Utterson and a few other roles, serving to help propel the story forward with dignity and stately grace.

Director Patrick McGregor II stages the action all around the audience; this is an environmental production, so the audience is seated on small bleachers all around the main performance space, one of the reasons for the limited seating. When artistic director Dee Shepherd warned everyone to stay in their seats and within a designated area during her introductory speech before the performance, she wasn’t kidding; the actors, props, and set pieces are sometimes just inches away from audience members. Some may find that intrusive, but those people are probably in the minority and wouldn’t have come to such a production anyway. My friend and I were thrilled to feel like we were right there in the middle of the action, and the people across and to the sides of us seemed to agree, their gasps loudly audible as actors would suddenly appear behind them or a violent murder would be enacted within arm’s length. Hyde’s slithery voice can often be heard from several directions at once, not by the use of some fancy sound engineering but because the character is played by many people; there are times when they speak the same lines, a terribly creepy effect when a voice suddenly pops out from behind you from an actor you didn’t know was there.

Dr. Jekyll and Mr. Hyde is the rare reimagining of a classic that complements the original rather than seeking to replace or upstage it. The basic concept of separating good from evil and the struggle in the body of one man is still there, but the characterizations and situations all around are modified to tell a different version of this story. Standing Room Only’s production is the kind of show that can help engage an audience with preconceived notions about the static nature of some theatre while also offering something fresh to even the most jaded theatregoer. The decision to have such limited seating may not be the most sound financial decision but it pays off in spades for the privileged few audience members that will catch this production before it’s gone.

Dr. Jekyll and Mr. Hyde continues through to October 18th in the Shedd Theatre within the Columbus Performing Arts Center at 549 Franklin Avenue, and more information can be found at http://www.srotheatre.org/dr-jekyll-and-mr-hyde.html 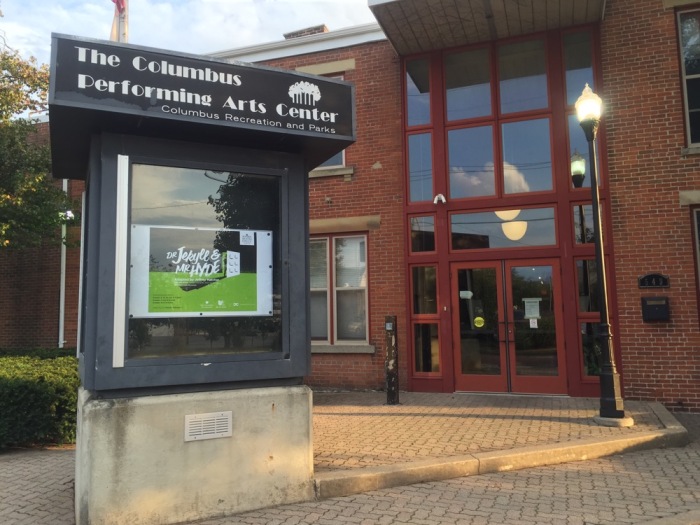 I am so glad I got to spend so much time these past two months with “Sy” before he passed away yesterday. From growling and biting me the first week at my new home to fairly quickly following me from room to room and sleeping on or near my bed every night. Damn, what a smart, ornery, handsome, wonderful dog @zaxruss had.
%d bloggers like this: