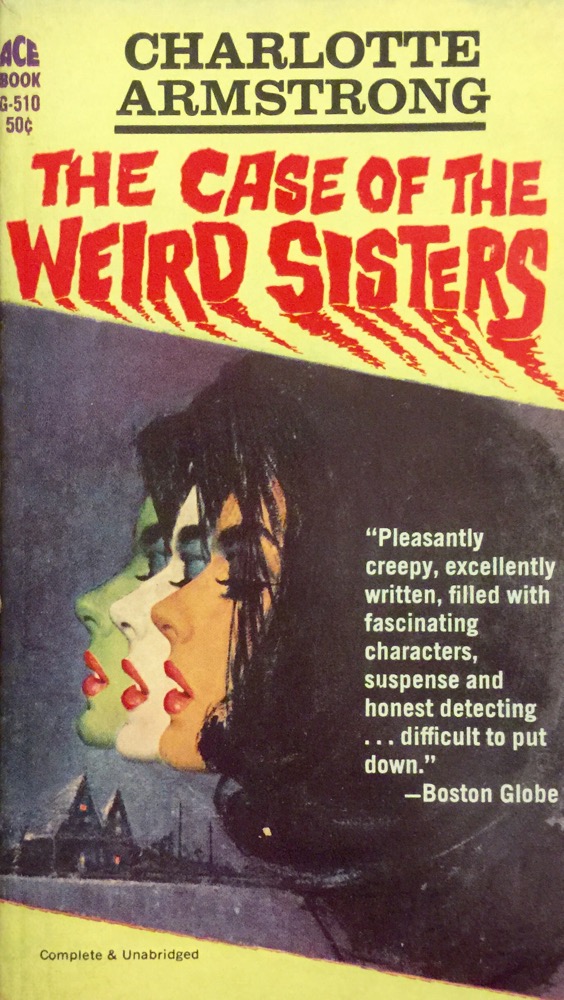 The strange title and cover art drew me to The Case of the Weird Sisters, a vintage thriller by Charlotte Armstrong, a familiar name as I have other paperbacks written by her with similarly intriguing artwork. Though this is a 1965 paperback reissue via Ace Books, I was surprised to find that the novel was actually originally released in 1943! The artwork is typical pulp that doesn’t really bare any resemblance to the novel within; the sisters aren’t triplets and don’t look alike. Oh, and one isn’t green either.

The story begins when Alice Brennan, a young secretary, agrees to marry the much older (but rich) Innes Whitlock. Alice doesn’t love him, and she’s quite honest about marrying him for his money, but Innes seems to be fine with it as long as she is a good little wife who cooks and cleans. They make an unexpected trip to the home of his three older spinster half sisters, where he lets them know that he is engaged and will be taking over their financial affairs; they collectively have squandered their inheritance, and Innes is done with bailing them out. After knowingly serving their brother meatloaf containing veal (it used to make him terribly sick as a child), Innes and Alice are stranded at the home of the three sisters until his illness passes. And that’s when unfortunate events start happening, as it appears that one of the sisters is out to murder her brother rather than have his fiancée stand to inherit his fortune.

What is interesting is that each of the three sisters has a disability; Gertrude is blind, Maud is deaf, and Isabel is missing an arm. Whether this makes them “weird” as indicated in the title is something that I wouldn’t say is accurate, but that appears to be the intent. It’s refreshing to read about differently-abled people that aren’t sanctified and can have serious personality flaws, something the political correctness police frowns upon nowadays whether it is true or not. They are also referred to at times in the novel as “cripples” as well, a pejorative term not used in today’s more enlightened and polite society.

There is another aspect that is very much of its time and unfortunate: the description and characterization of a Native American named Mr. Johnson. He is of course called an “Indian” and further described as “not a Negro” but having “a flaring line from his nostrils to the tip of his nose that [is] both foreign and familiar,” possessing “dirty fingers” and that he “belongs in the barn,” and described as having a foul “Indian” smell. Sometimes he is just referred to as “the Indian” and nothing more. Most of this kind of talk is in the narrative, not things the characters say outright. There is the implication that one of the three sisters is carrying on with Mr. Johnson and as such she must be “lustful, horrible, disgusting” and having “no moral starch in her.” Mr. Johnson’s ethnicity makes him game for ridicule, and this novel is an unfortunate document representing a popular sentiment of that time.

There are a few coincidences in the plot that defy reality, such as the fact that a former college professor of Alice’s, MacDougal Duff, who is an amateur sleuth, just happens to be renting a room in a guesthouse on the property. Now that’s convenient, isn’t it? Mr. Duff had lost contact with Alice, but here he is renting a room in the home of one of her future in-laws in another town. Of course he and Alice team up to examine the clues and interview the sisters, and their discussions contain some excellent deducements that help to solve the mystery.

I finished this novel in a day, finding it more entertaining that I had expected despite my reservations once I learned just how old it was. Gone was the expectation of some tawdry moments or rough language, but the basic story and outline of the plot holds up remarkably well. I was able to finger the culprit before the ending, but I didn’t expect just how everything would unravel. Let’s just say there is a strange fact about the Whitlock house that is revealed nonchalantly early on in the novel that figures into the climax, one I certainly never saw coming. This is exactly the kind of mystery novel I like, and it’s a testament to Ms. Armstrong’s skill that it is still a page turner more than seventy years later.