It can’t be easy to stage a play after a film version of it is a huge success; The Sound of Music and West Side Story are two properties for which I always think of the film versions when they are mentioned even though I know that they were Broadway plays first. Grease is another of those plays that is difficult to disassociate from its 1978 film version starring John Travolta and Olivia Newton-John. It seems like one has to either copy the film or go in a completely different direction when staging some of these properties now; the best solution is probably to be somewhere in the middle. And that’s where I think Columbus Children’s Theatre production of Grease succeeds – it’s familiar enough to be recognizable to fans of the film but different enough that it exists as its own experience.


Grease, written by Jim Jacobs and Warren Casey, premiered in Chicago in 1971. It moved to Broadway in 1972 and ran for a then-record eight years but won no awards. Loosely based on Jacobs’s memories of growing up, Grease is set in 1959 at Rydell High School and focuses on two packs of teenagers: the Pink Ladies and the T-Birds. The play is a series of vignettes and character songs loosely strung together by a thin book about summer lovers Danny and Sandy and the pressures they face in high school with their friends. There are many memorable songs such as “Summer Nights,” “It’s Raining on Prom Night,” “Freddy My Love,” and “There Are Worse Things I Could Do”; the film version introduced “You’re the One That I Want,” “Hopelessly Devoted to You,” “Sandy,” and the (dreadful) title song. The film songs are now often included in stage productions of the show as they are in this one. 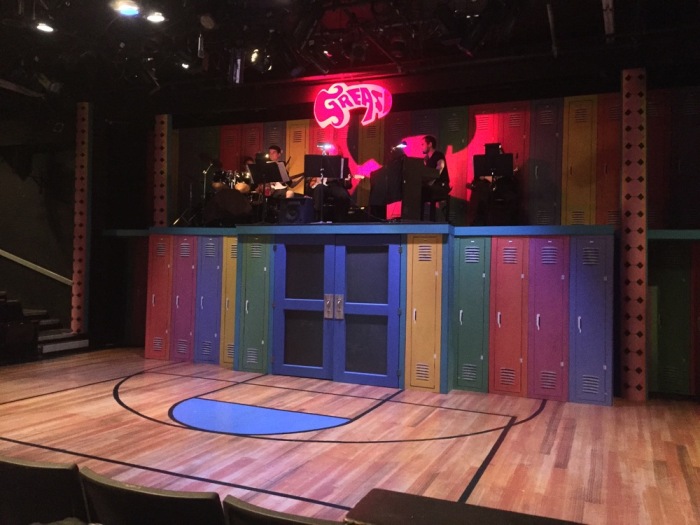 The band is comprised of five members that play on a platform above the actors, sounding good but restrained. The set looks like a gym floor with lockers along the wall; a rather incongruous combination but one that works well enough to evoke the high school setting. The show opens with a serious of intense colored lights alternating over the set that reminded me of the prologue in the film of West Side Story with the line drawing of the city that had a background of constantly changing colors. When the cast appears to open the show, it is funny to see the girls with so much makeup on and such big hair. They look more like divorcées in their 40s than high school girls, but the film was no different.


Ricky Locci is charismatic and sexy as Danny Zuko, completely believable as the leader of the pack. It takes a special performer to sing and dance but still look cool, and Ricky is just that. He knows just when to smile and when to make it all disappear; Ricky is just the kind of guy who has “got it” and is fine with showing it.

Jordan Shafer is delightful as a redheaded Sandy Dumbroski and thankfully doesn’t try to be Olivia Newton-John. Sandy seems to have more of a personality in the show, or maybe that is just what Jordan brings to the part. She’s likable without being cloying (that’s left for the character of Patty Simcox), and she sings with confidence and feeling. There are moments when I felt like she had more to say but that the lines weren’t in the script; Jordan is only limited by the book of the show.

Jordan and Ricky are great as a couple; they have chemistry and seem to genuinely like each other, something difficult to fake. They have the most important parts in the show, and it’s unfortunate that they don’t have more scenes to interact together like the characters do in the movie.

Kelly Hogan makes for a wry Rizzo, showing just enough attitude to not be a total bitch. Her dark wig, scarf, and sunglasses evoked Jackie O to me more than 50s high school student, but it was still fun to see her strutting and bossing the Pink Ladies around. She belts a great “There Are Worse Things I Could Do” as a retort to Sandy, something I wasn’t expecting as this differs from (and works better than in) the film.


I have an issue with Jared Bradley as Kenickie. On one hand he looks the part, trying to copy Danny’s hair and cool factor, and Jared even looks similar to Ricky in the face. The problem is that he takes a few of his dance moves a bit too far in the wrong direction; when he reached up and arched his back at the end of “Greased Lightnin'” I was reminded of when Jennifer Beals pulled the cord and the bucket of water splashed down on her in Flashdance. Kenickie is supposed to be second-in-command to Danny, but Jared has his jeans up nearly to his navel and comes off as the least cool of the T-Birds.

A surprising standout in the cast is Charlotte Brown in the small role of Cha Cha, Kenickie’s date and Danny’s dance partner at the dance. She only has one scene, but she arrives with gusto, hair teased and all loud and pouty. She’s really hilarious, hamming it up in just the right way to let everyone know exactly who they were dealing with: trouble!


Director David Bahgat did a serviceable job at keeping things moving and interesting, and he mostly staged scenes so that the action was clearly visible from any seat, important as the theatre has eight rows to the left and right but only three rows in the center. Bahgat doesn’t always seem to know what to do with his cast in scenes not in the film to reference, such as the opening title song that is animated in the movie. It was a lukewarm opening when the cast came out and basically engaged in what appeared to be a large ring-around-the-roses sing a-long. Another odd choice is when he had Sandy face away from the center rows for part of “Hopelessly Devoted to You” just so he could have her run forward and turn around dramatically later in the song.

I had heard that the stage version of Grease had been revised and sanitized over the years; apparently it premiered in a far more raw and vulgar version in 1971. This Grease was fairly tame too, perhaps with a bit more cursing than the film but nothing kids haven’t heard before. The sexual jokes seemed to fly right over the kids in the audience as well they should, but the “Mooning” song they found particularly hilarious.

If there is one thing that really limits the show it is the book. Very little depth is given to any of the characters, and this is one area in which the film is far superior. Songs were cut or given to the band to play at the dance competition in the film to make room for more interaction between the cast, something sorely missing in the stage version by comparison. Still, the cast is mostly quite good and the music very hummable; Columbus Children’s Theatre production of Grease is worth seeing if only for those attributes, and I look forward to seeing future productions by this company (this was my first). Even if I found the overall show a little ho-hum, coming alive in some key scenes, I’m sure this production will have many fans. If you like the movies of Grease or Mamma Mia, you’ll be sure to have a good time.

Grease continues through to August 16th at 512 Park St., and more information can be found at http://www.columbuschildrenstheatre.org/grease.html 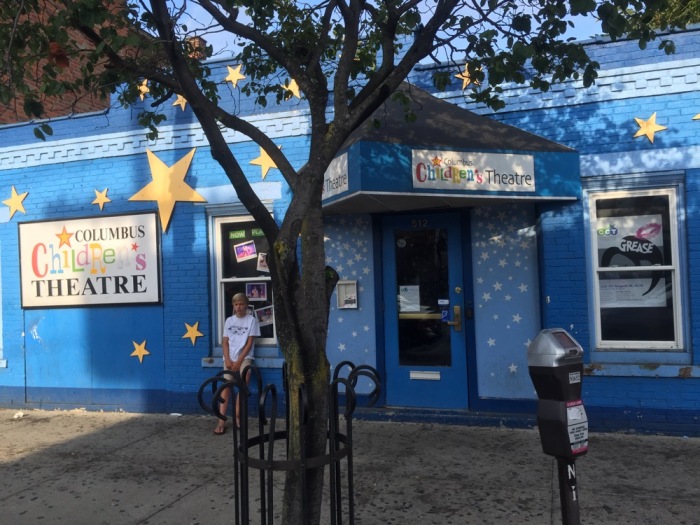