It’s awful that it took so long for me to finish this little book. I sent a spare copy to a friend so that we could both read and discuss it, and he finished his ages ago. Oh well, it’s done now.

This is my forth MacDonald novel, and it was originally released in 1960. It has all the elements of the other MacDonald novels that I like: deft descriptions, snappy dialogue, unpredictability. It meanders a bit halfway through, but it is still a good read even if I’d rate it as the lesser of the author’s works that I’ve read to date (my favorite being Where is Janice Gantry?).

The story is about recent widower Mike Rodenska visiting old war buddy Troy Jamison at Jamison’s place on the beach in Florida. While visiting he uncovers a plot to take over a land development of Jamison’s that is about to go belly up while also dealing with Jamison’s caring but absent wife, spoiled and bratty sex vixen of a stepdaughter, and a whore from Jamison’s past. Mike steps in to try to help Troy, but the man is hell bent on destroying everything with his alcoholism and penchant for a certain woman who led him down a similar path years earlier.

My favorite parts of the novel involve Mike and the wayward woman that his buddy Troy just can’t keep away from, Jerrana Rowley. MacDonald has a way of painting a picture that would surely infuriate women today with how cutting his observations could be, as the women in his novels tend to either be Madonnas or whores. 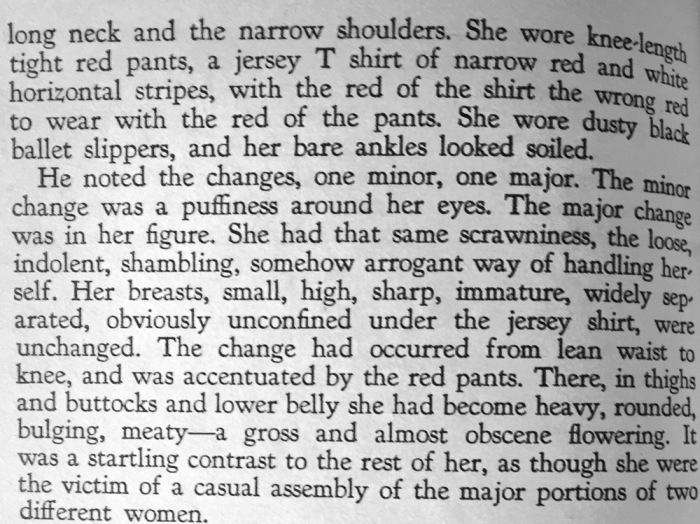 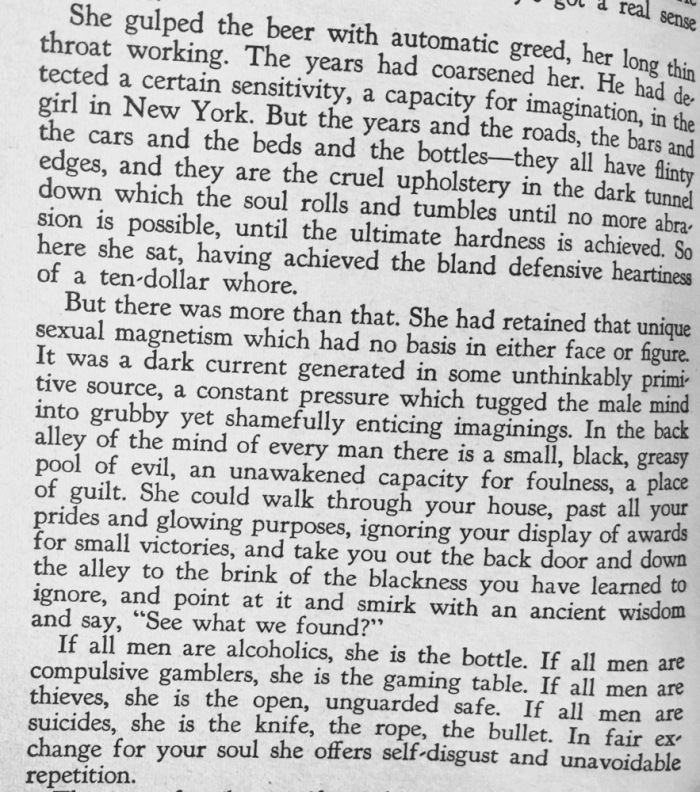 This is the way she is referred to after maybe five years of hard living, going from place to place before re-entering Troy’s life again. The initial description of her wasn’t flattering either, but this latter synopsis is particularly vivid and biting. And yet, the character of Jerrana still has a bit of charm in her dialogue and doesn’t come off as completely rotten.

This is another description that made me take notice. In this scene, Mike goes to Jerrana’s cheap and foul bungalow looking for Troy. This is how he describes the state of the place.

What exactly does “female” smell like? I’m sure there are many people who know, but to put that adjective between burned food and urine? Classy.

The novel reaches a rather satisfying conclusion even if it does wrap itself up a bit too easily. Still I enjoyed it as decidedly second rate MacDonald, which is still better than most first rate anyone else.