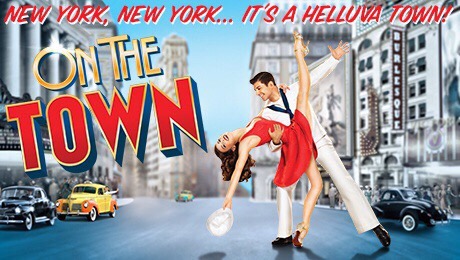 I was on my way to the TKTS booth this past Sunday prepared to get a half price ticket to On The Town for around $75 when I received this notification on my phone:

Color me thrilled! The show was one of the reasons I made the February trip to NYC as I had read that it wasn’t selling well but got great reviews, and now I was going to get to see it for only $20! I went with a friend, Phuong Anh, and she is from Vietnam. The show began with a giant flag and “The Pledge of Allegiance,” and I stood and put my right hand over my heart just like in elementary school. Phuong Anh was a bit bewildered at first, but she got the idea when she looked around at everyone else standing and quickly followed suit. We had very nice right box seats, and from there I noticed that the rear of the orchestra and most of the mezzanine was empty while the balcony was oddly full. If this was as packed as it was gonna get on a Sunday matinee, I’d hate to think what kind of house they play to on Tuesday evenings.

Now, my prior experience with On The Town was minimal. I’d seen the 1949 film and knew a few of the songs (only three songs were retained for the stage to screen transition), and I knew that the original show was highly regarded and had music by Leonard Bernstein and lyrics by Comden & Green. I thought the film was only “okay” (I know that it is highly regarded in its own right), so I was excited to see what the stage original had to offer. I was not disappointed.

The Lyric Theatre is one of the biggest house on Broadway, and this revival fully utilizes its large stage with set pieces that are arranged for maximum depth. Everything about this production feels and looks big and full, from the lush sound of the orchestra to the ballets that expand beautifully to fill the space. The plot is incredibly thin (three sailors get to spend a day in New York and set out to find the girl crowned “Miss Turnstiles” on a poster for their buddy who is smitten), but the cast is so lively and the show so boisterous that it doesn’t seem to matter.

I wasn’t prepared for the long stretches of ballet used to tell the story or expand upon situations. They were impeccably staged and skillfully executed, a notable one involving “Miss Turnstiles” walking across the palms of some dancers’ hands as they stood with their arms raised above their heads. I’m probably not describing it well, but I held my breath through it. For dance disciples, this show is incredible! For the rest of us, it’s very good though overlong.

This would be a perfect production to record for broadcast on PBS and for video release, though I know of no plans to make that happen at this time. It looks and feels expensive, and perhaps picking such a large Broadway house wasn’t the best choice considering the age and type of the material and its prospective audience. My friend and I both enjoyed it, though we agreed that the dancing was a bit much for our tastes. ***/****, though I can understand other people giving it **** if they are big into dance and the show itself. I couldn’t find a single fault with the cast or production.